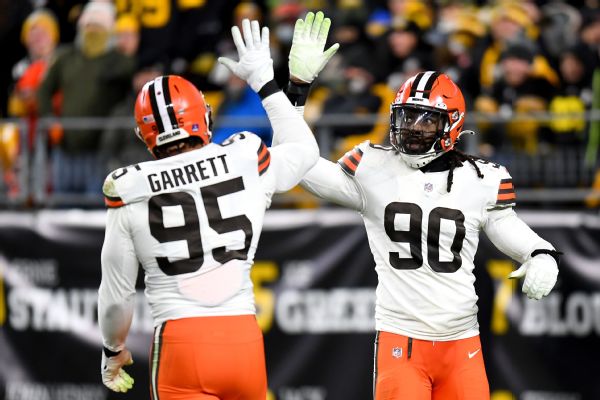 Cleveland Browns defensive end Jadeveon Clowney said he apologized to teammate Myles Garrett after reportedly saying that he likely wouldn’t be returning to Cleveland because the organization favored Garrett over him.

Clowney also claimed in a statement issued to ESPN’s Adam Schefter that his comments in an interview with Cleveland.com were “completely misrepresented” and “taken out of context.”

“As a son and a parent, I want to fully apologize to anyone offended, specifically Myles Garrett and his family,” Clowney said in the statement. “As a man, I have reached out to Myles specifically to apologize. I will continue to learn and grow as I move forward.”

According to Cleveland.com, Clowney said last week that he was “95% sure” he wouldn’t be re-signing with the Browns because they were “trying to get [Garrett] into the Hall of Fame instead of winning games.”

Clowney was sent home before last Friday’s practice and was ruled out of Cleveland’s game Sunday at the Pittsburgh Steelers, which the Browns would lose 28-14.

“I don’t even think [Garrett] notices. I ain’t trying to say it’s him,” Clowney said. “I try to get along with everybody I play with. Me and him don’t have a problem. It ain’t his fault, and it’s B.S., and I don’t have time for it. … [The Browns have] got their own guys, and I ain’t one of them, so it’s time for me to get my exit slip.”

Clowney had a disappointing second season for the Browns, who finished 7-10. After racking up nine sacks with the Browns last year, Clowney had only two this season. He also sat four games with ankle and concussion injuries.

According to defensive ends coach Chris Kiffin, Clowney refused to play on first or second down in Week 7 against the Ravens because he was upset with the game plan. Clowney was benched for the first series the following weekend against the Cincinnati Bengals.

Garrett, meanwhile, finished with a team-high 16 sacks, tied for second-most in the NFL. He also faced the highest double-team rate (31.4%) of any edge rusher in the league.

Last Friday, Garrett said he was “disappointed” and “a little bit confused” by Clowney’s comments.

“I knew he was frustrated. We’ve all been frustrated; we’re not winning,” Garrett said. “I wish we could’ve talked about this man-to-man. … I wish he would have handled it a little bit differently.”

Garrett said his relationship with Clowney had always been “cordial” and that he didn’t take the comments personally. But when asked whether he’d welcome Clowney back, Garrett said he wants “volunteers, not hostages” on the Browns.

“If you feel like no one believes in you here,” Garrett said, “then go where you feel like you’re wanted and loved and appreciated.”