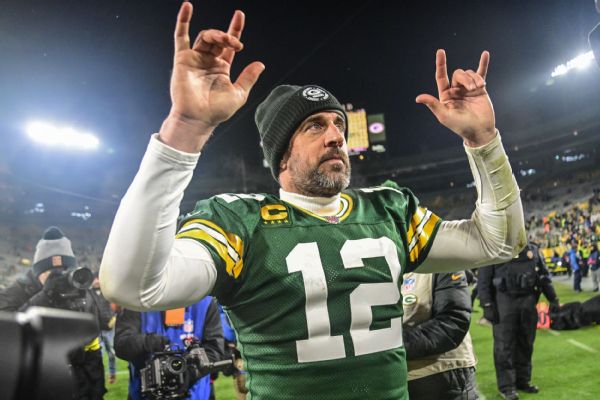 GREEN BAY, Wis. — Brian Gutekunst said he could look Aaron Rodgers in the eye and tell him straight up if the Green Bay Packers wanted to move on from the 39-year-old quarterback.

But the Packers’ general manager said Friday that that was not the case at this point, five days after his team ended the season with an 8-9 record and missed the playoffs for the first time since 2018.

“If we were? Sure, absolutely,” Gutekunst said during a 30-minute news conference to wrap up the season. “You’ve got to be honest with him, you know what I mean? I think he deserves that if we get to that point. We’re not at that point.”

Nor, apparently, is Rodgers ready to say whether he plans to return for the 2023 season and, if he does, whether it’d be for the Packers.

Just as both sides did at this time last year, they’re going to take their time. The Packers won’t push Rodgers for a decision, and Rodgers won’t make one in haste.

“I got to see what it feels like once I get away from this,” Rodgers said after Sunday’s loss to the Lions.

One major factor is different this year: There is no contract issue to work out. He’s only one year into the three-year, $150 million contract extension he signed last March. Rodgers would make a guaranteed $59.465 million if he played in 2023. He has a $58.3 million bonus, which the Packers have the option to exercise anytime between the first day of the league year (March 15) and the day before the Packers’ first game of the regular season.

“We made a really big commitment to him last offseason, so I think as we did that it wasn’t certainly for just this year,” Gutekunst said of the recently completed 2022 season. “He’s going to take his time, and the communication will be pretty constant as we move forward.”

Last offseason, Rodgers announced his decision to return on March 8.

The Packers also must decide by early May whether to exercise the fifth-year option for 2024 on backup quarterback Jordan Love‘s contract. That would be worth around $20 million. Gutekunst has said previously that he could not foresee having both Rodgers and Love on the roster in 2024.

Rodgers played most of this past season with a broken thumb and also had rib and knee injuries later in the season, but the Packers opted to allow him to play through the injuries and not miss a start. He broke his thumb on the last play of what turned out to be the first of five straight losses.

After throwing 85 touchdowns and just nine interceptions combined in the previous two seasons, which ended with him winning NFL MVP for the third and fourth times in his career, he had 26 touchdowns and 12 interceptions (the second-highest total of his career) in 2022 after the Packers traded his best receiver, Davante Adams, to the Raiders last March.

Meanwhile, Love showed promise in his most extensive action of the season, leading a pair of scoring drives late in the Nov. 27 loss at the Eagles after Rodgers left with the rib injury, but did not start a game. His only career start came in a 2021 loss at the Chiefs in a game Rodgers missed because of COVID-19.

When asked whether Rodgers or Love gives the Packers a better chance to win next season, Gutekunst said: “Well, I mean, you’re talking about a four-time MVP, right? We are very excited about Jordan and where he’s at, there’s no doubt about that. But Jordan’s never played a 16-, 17-game season and gone through all that stuff. So, it’s no different than when we moved from Brett to Aaron, right? That’s a hard thing to say, but at the same time, where Aaron’s at, the level he’s at, there’s not many teams he wouldn’t give the best chance to win.”