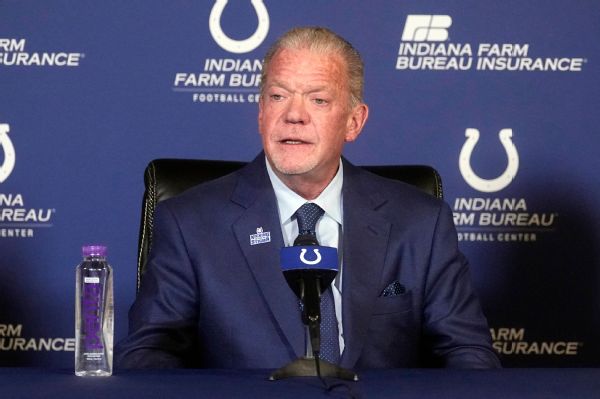 INDIANAPOLIS — Indianapolis Colts owner Jim Irsay acknowledged Friday that his franchise fell short of expectations this past season and said it’s his responsibility to find solutions.

The comments came in an open letter to fans just three days after general manager Chris Ballard told reporters he had failed after the Colts went 4-12-1 and missed the playoffs for the third time in four years.

“Please know this — no one is more unsatisfied than I am,” Irsay wrote. “No one has higher expectations than I do. And no one wants to win for our fans and our community more than the people in our organization wearing the horseshoe every day. So as I’ve always said, the responsibility for making us better ultimately falls on me.”

Irsay served notice big changes were coming when he fired coach Frank Reich in early November after a third straight loss. It was the first midseason coaching change Irsay made since taking over ownership from his late father in 1997.

Now, Irsay is plotting a way back to relevance with Ballard leading the team’s coaching search.

Ballard and Irsay also have said repeatedly interim coach Jeff Saturday is in the mix.

Whoever gets the job will be inheriting a team with the No. 4 overall draft pick, a favorable schedule and Irsay’s big expectations for a rebound next season.

“No one can ever guarantee wins or losses,” he wrote. “But as long as I’m owner, I can guarantee that winning championships will always be my goal, and I’ll be doing everything I can to help get us there. That’s what you deserve, and that’s what we’ll be working hard to deliver.”

The Associated Press contributed to this report.