Chelsea moved quickly to agree a deal for Shakhtar Donetsk winger Mykhailo Mudryk, despite Arsenal having been favourites after submitting three previous bids to land the 22-year-old Ukraine international.

The Blues got their man for a €70 million transfer fee, plus another €30m in potential add-ons, for a total package of €100m for a player who has only recently broken through properly in his career.

Mudryk has scored seven goals and registered six assists in 12 games in the Ukrainian Premier Liga this season, but he caught the eye of Europe’s elite clubs in the Champions League as Shakhtar sealed progress to the Europa League knockout stage with the help of his three goals and two assists from six games.

The winger first arrived at Shakhtar aged 15 and was given his senior debut by Paulo Fonseca in a 2018 Ukrainian Cup game at the age of 17, before a couple of loan spells saw him continue his development at Arsenal Kyiv and Desna Chernihiv.

Then-Shakhtar coach Roberto De Zerbi gave him a chance in the 2021-22 campaign and he never looked back, making his senior Ukraine debut in the 3-1 win against Scotland in the World Cup playoff at Hampden Park in June and going on to cement his place in the first XI amid the upheaval of the war with Russia.

Known as “Misha” to his friends, Mudryk has “Only Jesus” tattooed on his neck and “Dear God, if today I lose my hope please remind me that your plans are better than my dreams” on his chest.

With help from our resident scout Tor-Kristian Karlsen, here is everything you need to know about the 22-year-old whom Chelsea have signed to an 8½-year contract.

Mudryk played on the left wing for Shakhtar, and left of a front three for Ukraine. He is right footed, so he often cuts inside to shoot on his stronger foot and uses his pace to break through the defensive line. 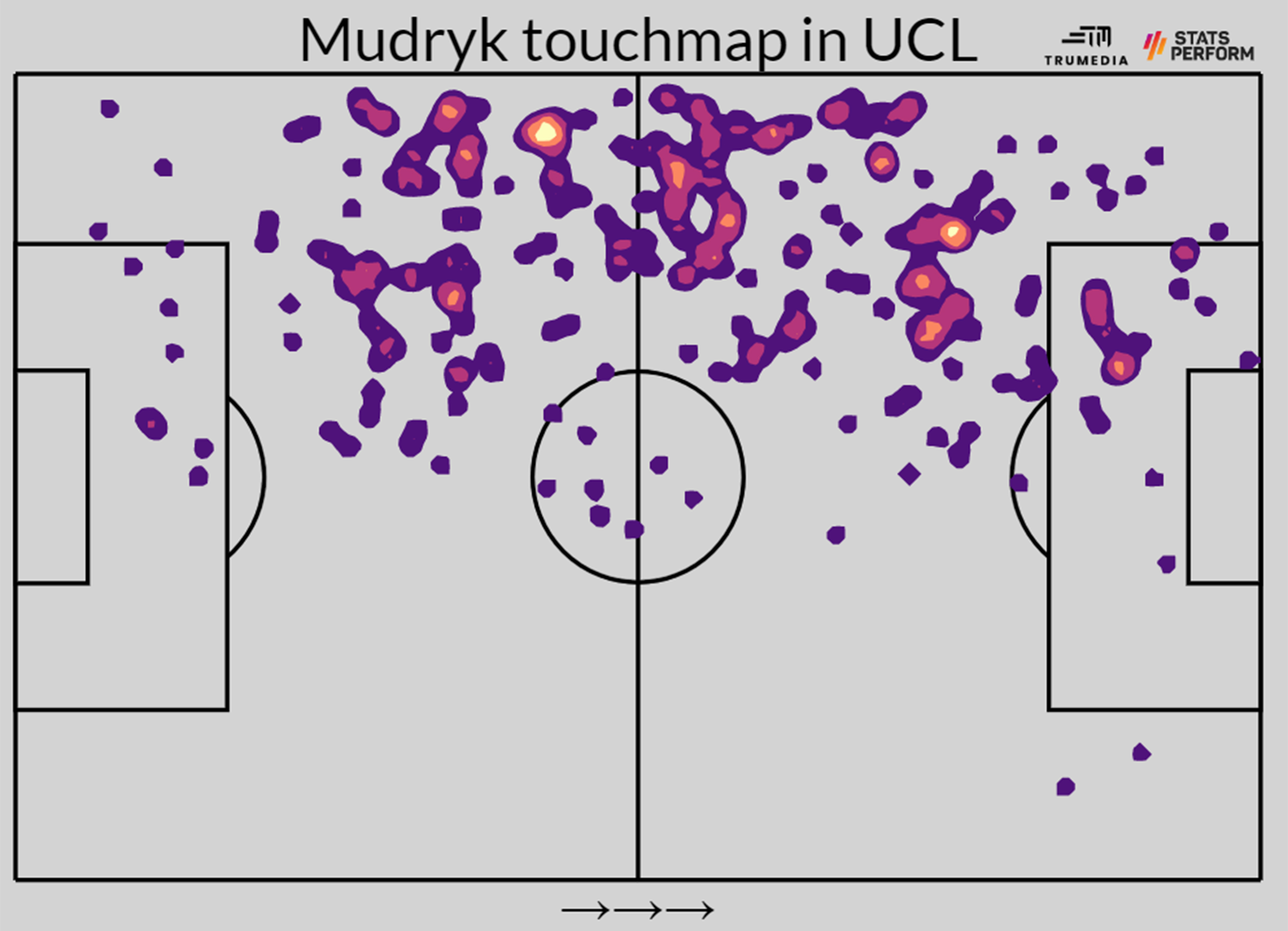 Mudryk’s Champions League career is only six games old so far, but he has made a big impact.

A right-footed inverted winger who thrives when dribbling at opponents and cutting in diagonally on his stronger foot, the Ukraine international is creative, technically gifted and full of acceleration, and he can reach top speed in an instant.

His willingness to dribble is nearly off the charts (eight dribbles per 90 minutes in the Champions League is impressive) and he has improved his weaker foot, which makes him hard to read in one-vs.-one situations. He can hit a fine shot and doesn’t mind going it alone, where he can produce a goal or a defence-splitting assist (1.33 key passes per 90 in the UCL) in a burst of sudden creativity.

Despite his penchant for individual actions with occasional excessive ball losses, he’s an improving combination player too. The swiftness of how he executes his actions (the change of pace, darting off-the-ball runs, instinctive decision-making) is an outstanding feature and one of the main reasons why he’s so attractive as a player.

Mudryk has a low centre of gravity, and his ability to improvise when seemingly running out of options makes him tough to stop for defenders and fun to watch for fans. — Karlsen. 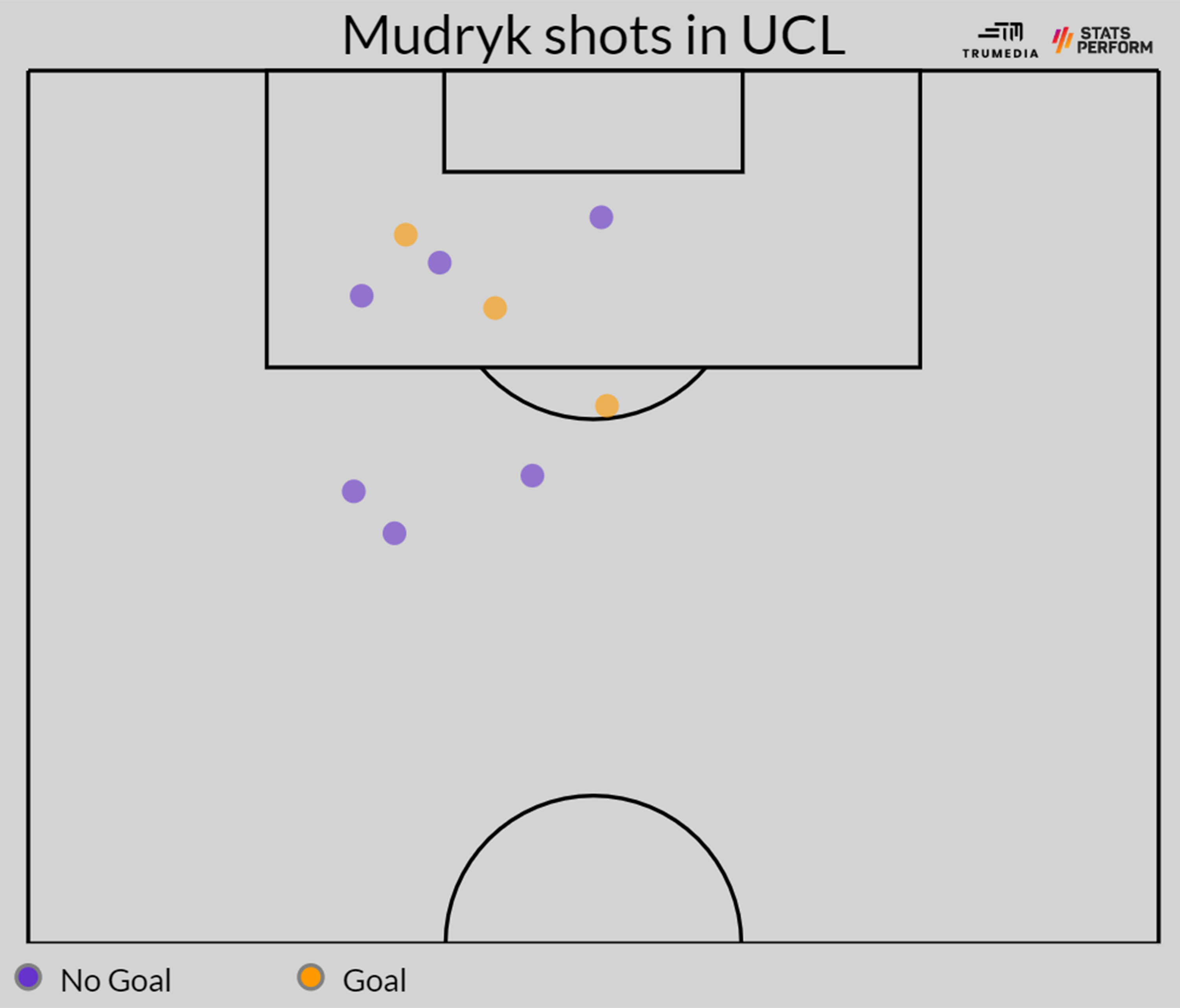 How he can improve

Mudryk is very single-minded when it comes to his dribbling and tends to aim directly for goal, which can work as a positive sometimes but makes him less aware of teammates around him. His retention of the ball could use some work (nine losses per 90 in the Champions League is a lot), but he is a high-risk player who can take advantage of any weakness in a defence.

His attitude was clearly an issue in his early years, but De Zerbi helped him and he has now matured with a different approach to his trade. Defensively, he tracks back but needs to work out how to use his body effectively and gain some strength. Relatively untested in top-flight football, he should refine his attributes with age and experience. — Karlsen

“There are more people in the middle. But, you know, the middle is also OK for me. My inspiration is Cristiano Ronaldo because of what you can do if you work hard and believe in yourself. I like the way Cristiano plays. I see myself like that — a winger. But I need more time to change my position from No. 11 or No. 7 to No. 9. With time it is possible.”

Darijo Srna, Shakhtar’s director of football, told CBS Sports: “Mudryk is a serious talent. After Kylian Mbappe and Vinicius Junior, he’s the best player in Europe in his position. If someone wants to buy Mudryk they must spend a lot of money and respect our club and president.”

Shakhtar captain Taras Stepanenko told The Athletic: “His attitude for me was not very good for a young player. He sometimes didn’t hear what the coach said to him. I tried to speak with him to send him something Xavi, the Barcelona coach, said about the young players. It was a very good interview about young players and how they should have [the right] attitude.”

How will he fit at Chelsea?

Chelsea boss Graham Potter is a fan and reportedly played a large role in signing Mudryk. Though the winger’s favoured position on the left wing is currently occupied by Mason Mount, Christian Pulisic and sometimes Raheem Sterling (when not playing a 3-5-2), injuries and loss of form in the squad should give him a chance to shine.

The Blues have struggled up front this season — scoring the same number of goals as Manchester City striker Erling Haaland (21) — but Mudryk may be able to adapt to become a No. 9 striker. He will certainly add to their goal threat in the second half of the season, regardless of where Potter slots him into the system.