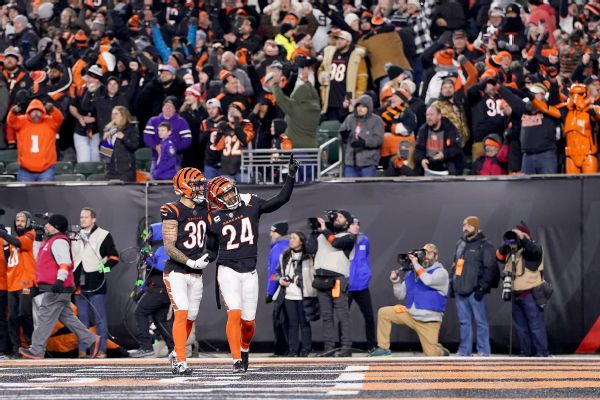 CINCINNATI — The scene inside Paycor Stadium felt familiar following the Cincinnati Bengals‘ 24-17 playoff win over the Baltimore Ravens. It was also historic.

With their win in the wild-card round, the Bengals have won a playoff game in back-to-back seasons for the first time in franchise history. Cincinnati, which reached the Super Bowl last season, knocked off its AFC North rival Sunday night to advance to the divisional round for a second straight year.

“It’s a whole team, era, whatever you want to call it,” said defensive end Sam Hubbard, whose 98-yard fumble return for a TD in the fourth quarter lifted the Bengals to victory. “That’s just the mentality we have. We’re not worried about curses or the past or anything like that.”

For decades, it seemed as if the Bengals were fighting supernatural forces as they went 31 years without a playoff victory. Locally, it was chalked up to “The Curse of Bo Jackson,” when the then-Los Angeles Raiders running back suffered his career-ending hip injury in a playoff win over the Bengals.

The Bengals snapped any hexes last season with a win over the Las Vegas Raiders in an AFC wild-card game, setting the table for Cincinnati’s first Super Bowl appearance since 1989. In the three previous seasons that featured a playoff win — 1981, 1988, 1990 — the Bengals failed to win a postseason game the following season.

In only one of those seasons, 1982, did Cincinnati even make the postseason. The Bengals were knocked out of the playoffs with a first-round loss to the New York Jets.

The Bengals were at risk of falling behind in the fourth quarter until their defense made a game-changing play. Bengals linebacker Logan Wilson knocked the ball out of Baltimore QB Tyler Huntley‘s hands as Huntley leaped over a pile of players and stretched his arms to the goal line. Hubbard gathered the ball and took off down the field for a 98-yard touchdown, the longest fumble return for a TD in NFL postseason history.

“Last year, I knew that we had to break the curse or whatever,” said Hubbard, who is from Cincinnati. “But this year, we weren’t worried about the past or anything.”

In 2022, Cincinnati matched the team record for most wins in a single season (12), a mark that was most recently set in 2015. That year featured the infamous wild-card playoff game against the Pittsburgh Steelers during which Cincinnati’s Vontaze Burfict was called for unnecessary roughness on Pittsburgh’s Antonio Brown, a penalty that eventually led to an 18-16 Steelers win.

But there was no bad mojo Sunday night.

The Bengals held the Ravens scoreless on all four of their fourth-quarter drives and maintained the 24-17 advantage.

“You’re here every step of the way — to get to the playoff, and it can all be over in a heartbeat,” coach Zac Taylor said. “Our guys didn’t want that to happen, so they found a way to move on.”

With the win, Taylor also passed Sam Wyche for the most playoff wins (4) by a coach in franchise history.

Wide receiver Ja’Marr Chase, who had a team-high nine catches for 84 yards and a touchdown, said the team’s streak of postseason success shows where the Bengals are as a franchise.