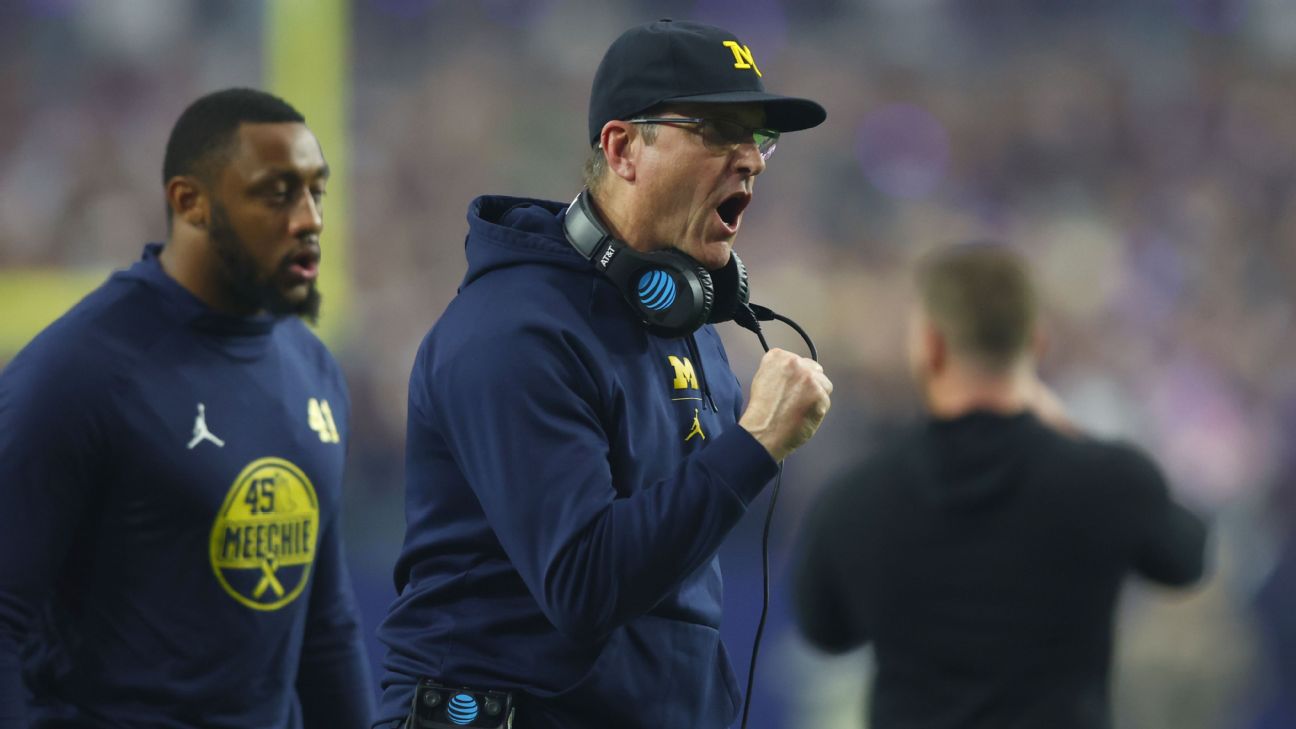 Jim Harbaugh will return as Michigan coach for the 2023 season after talking with NFL teams about a potential return for the second straight year.

University president Santa Ono tweeted Monday that he spoke to Harbaugh, who confirmed he would return for a ninth season at his alma mater. Ono, who took over as president in October, said he communicated the news to athletic director Warde Manuel.

“I love the relationships that I have at Michigan — coaches, staff, families, administration, president Santa Ono and especially the players and their families,” Harbaugh said in a statement. “My heart is at the University of Michigan. I once heard a wise man say, ‘Don’t try to out-happy, happy.’ Go Blue!”

Harbaugh last week interviewed via Zoom with the Denver Broncos about their head-coaching vacancy. He also had a conversation with Carolina Panthers owner David Tepper about the team’s coaching job, although it was not characterized as an interview, a league source told ESPN’s David Newton.

Harbaugh called the Broncos on Monday to inform them he was remaining at Michigan, ESPN’s Adam Schefter reported.

Last week, Ono released a statement saying that he had “very positive and constructive conversations” about Harbaugh remaining at Michigan. Harbaugh, who had reiterated his intent on remaining Michigan’s coach while also leaving the door open to an NFL return, followed by saying he appreciated Ono’s support for himself and the team.

He has guided Michigan to back-to-back Big Ten championships, wins over archrival Ohio State and the team’s first two CFP appearances. The 59-year-old is 74-25 as Michigan’s coach after starring at quarterback for the Wolverines before an NFL career.

Harbaugh, who went 44-19-1 as the San Francisco 49ers coach with a Super Bowl appearance and three NFC Championship Game appearances, interviewed for the Minnesota Vikings head-coaching vacancy last February. After not receiving an offer, Harbaugh returned to Michigan, saying he told Manuel that he would no longer pursue NFL opportunities. Rumors of an NFL return have surfaced throughout Harbaugh’s tenure at Michigan, but he had not formally engaged with pro teams until the past two years.

After Michigan went 2-4 in the pandemic-shortened 2020 season, the school revised Harbaugh’s contract, cutting his salary by about $4 million and making it less expensive to fire him. Last February, Harbaugh received a new five-year contract that increased his salary to more than $7 million and included several performance-based bonuses.

Harbaugh is 132-52 overall as a college head coach at Michigan, Stanford and San Diego.